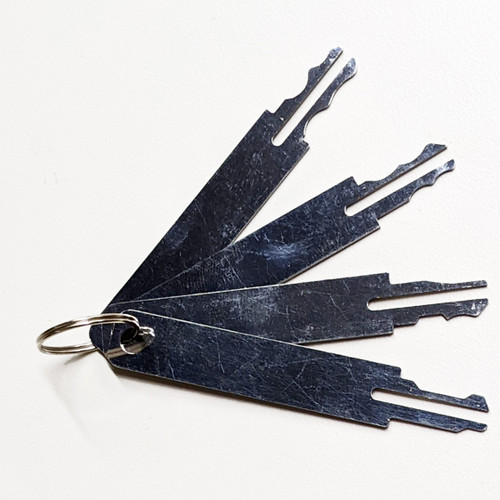 Occasionally one encounters a wafer lock which expects a key that features bitting on both sides of the blade.  While it can be possible to attack locks of this nature with conventional jiggler tools or rakes, many times the keyways of such locks feature one significant ward that protrudes into the middle and blocks easy insertion of such tools.  These split blade double-sided jiggler pick tools are designed specifically for such situations.

Small lock boxes, electro-mechanical key switches, and other types of double-bitted wafer locks are often trivial to open with one (or more) of these four tools.  Try them in the lock in both orientations and give a little movement like you would with our conventional wafer lock jiggler while offering slight turning pressure.   You might be amazed at how quickly things work out for you!