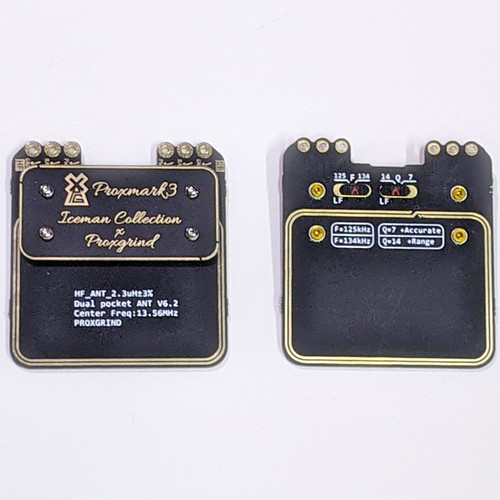 The Proxmark3 device has come a long way over the years.  From being a bare board of components assembled from kits, we later saw the RDV2.0 package from Elechouse with integrated antennas and a slick design.  Various RDV3.0 offerings appeared in Asia.  Then the RDV4.0 unit -- developed by ProxGrind and Iceman -- became the gold standard of the industry.  But astute hackers and RFID tinkerers will have noticed that now, in many source catalogs, the version designation "4.01" frequently appears.  (All Proxmark3 units sold by Red Team Tools are this latest version, for example.)

What does that small change to the current version number mean?

In short, the RDV4.01 units have two small hardware toggle switches on the underside of the antenna array.  Labeled "F" and "Q", these switches allow for more precise tuning of the Low Frequency antenna.

The F-Switch allows the user to toggle between optimal tuning for 125KHz or 134KHz frequency, depending on the type of tag with which you are working.  (The vast majority of common low frequency RFID tags are 125KHz.  Some 134KHz animal tracking tags or vehicle transponder tags would work with the stock Proxmark3 RDV4.0 antenna, but this new hardware package optimizes the process.)

Changing the antenna array on a Proxmark3 RDV4-series unit is a user-serviceable operation and relatively easy with either a small screwdriver or hex tool, depending on the type of fasteners installed on one's kit.  You can do this yourself!