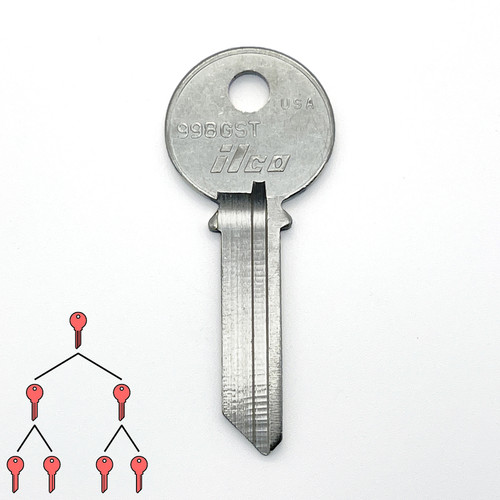 There are several methods for lock disassembly in the field or on a workbench, but almost all of them entail freeing the plug as a critical first step. Ensuring the tumblers are all in their "set" position so that the plug can turn and eject freely can be accomplished in several ways: the pins can be manipulated with pick tools, a bump key could be used, or in rare instances a comb tool can be employed. But all of those tactics leave distinct forensic marks inside of the lock which make these approaches non-surreptitious.

The process of "rear-shimming" with the aid of a factory blank key is the same method used by forensic locksmiths during disassembly of a cylinder, since it does not substantially add new and unexpected toolmarks to the pins or the plug. Naturally, however, this method requires a blank key that is capable of being inserted into the taret lock. For a dedicated field operator, this could mean buying and carrying a very large number of blank keys at all times!

Red Team Tools stocks and makes available a number of "multi-section key blanks" which can be inserted in a wide range of manufacturers' keyways. A key blank like this, along with a cylinder shim (included with this key purchase but also sold separately here on Red Team Tools), can assist you in surreptitious disassembly of a lock cylinder or it can also be used in a pinch in making a copy of a hard-to-source key, it can be helpful during an impressioning attack, or it can even be used to produce a bump key for rare keyways.

Most Yale lock cylinders have a one-letter or two-letter designation such as G, GA, GB, or GC.  The Yale "G" key blank is a master profile that will fit in not only their G lock cylinder but also all cylinders in that same sequence.  Likewise with the "S" key blank and the "T" key blank.

The Yale "GST" blank is Yale's all-section master key which can be inserted into the entire range of Yale keyways across their G-series, S-series, and T-series of locks.