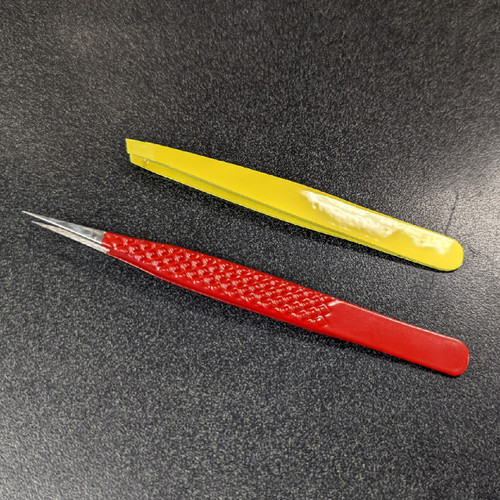 Red Team Tools offers a set of formed-end pinning tweezers for folk who are performing locksmithing work such as rebuiling or reconfiguring pin tumbler locks.  This set does not contain those style of tweezers, however.

The tweezers in this two-pair set are selected specifically for use against security seals and other tamper-evident technologies.  When attempting to lift an evidence seal or warranty seal or security seal of any kind (often with the use of solvent to attack the adhesive) one wants to achieve a precise grip on the seal in a way that is unlikely to disturb the product or the substrate.

There are two tweezers in this set:

The red tweezer tool has a very fine point for reaching underneath seals and in between surfaces with precision in order to begin the lift process.  This pair of tweezers has red anti-slip coating on the handle.

The yellow tweezer tool has a blunted wide point for grasping fragile and easily-disturbed items without marring or scratching them.  To that end, this pair of tweezers has yellow powder coating across the entire surface, including on the operating tip.

This is the same pair of tweezers used in the security seals tampering kit during training courses that teach these anti-forensic tactics.